When Will Driverless Trucks Be Part Of Your Fleet?

Throughout human civilisation there’s been a need to transport freight. This has evolved over time as new technologies were introduced and widely adopted.

The freight task for the pyramids was powered by humans, elephants got Hannibal over Alps, while the horse and cart kept freight moving until the discovery of steam as a source of power. The invention of the internal combustion engine then led to the emergence of diesel powered trucks as the dominant mode of transport in the twentieth century.

As a side note, the 1945 Australian vehicle census counted 15,000 horse-drawn vehicles still in operation. Clearly, new and old technologies have a long history of co-existing.

That is until now. We’re nearing a momentous point in the history of transport with a new breed of intelligent machines on the verge of powering and piloting the freight task.

Leading equipment manufacturers are investing heavily in the development of driverless features, with Frost & Sullivan estimating that 8,000 driverless trucks will be sold globally by 2025. The ramifications of this innovation are enormous, which is why Teletrac Navman commissioned ACA Research to assess intention to adopt within the Australian road freight transport industry.

Many transport operators recognise that autonomous trucks will support Australia’s growing freight task during the next decade, with 10 per cent saying it will have an important role and almost one-third more indicating it will play some part.

So, when do transport operators expect to introduce autonomous vehicles into their fleets? As Exhibit 1 shows, one in 10 businesses can be classified as early adopters who expect autonomous trucks to be part of their fleets within the next decade. A further 18 per cent expect to see driverless trucks in their fleet at some stage. Yet it seems the majority have little or no appetite for adopting this technology. 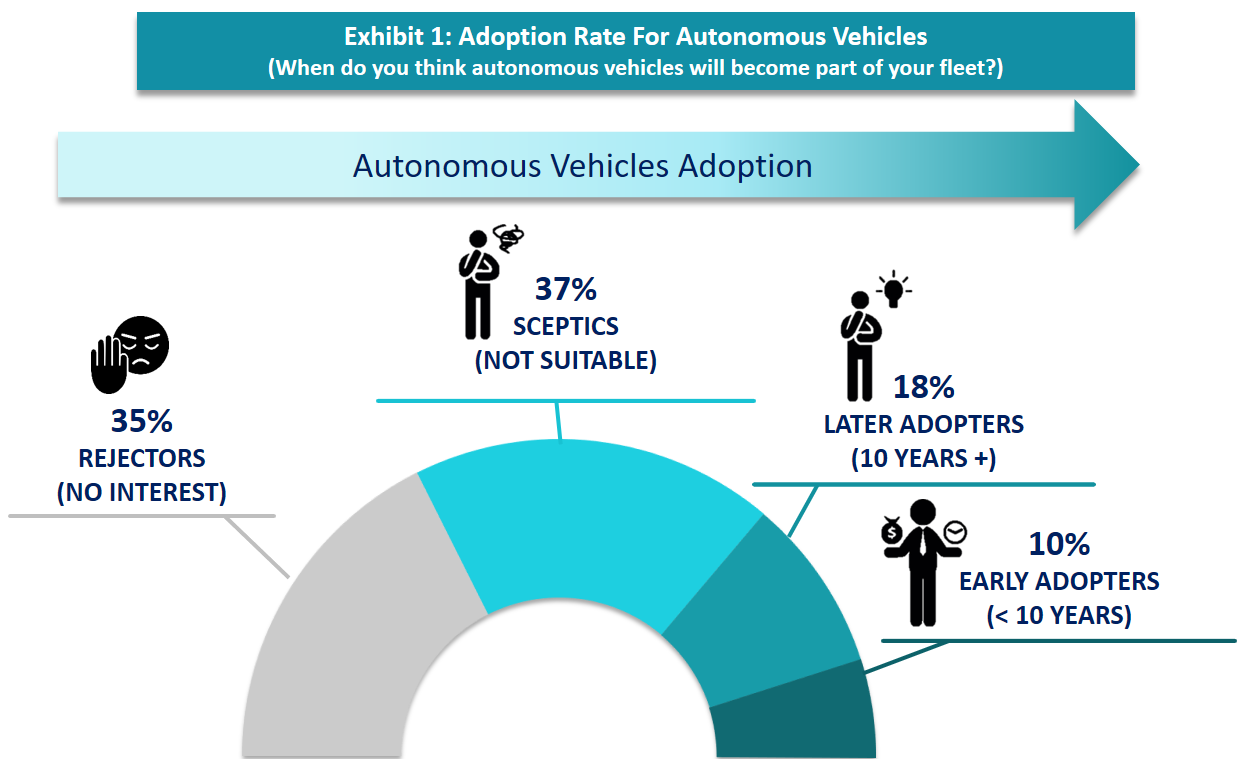 At face value, this suggests a slow and gradual adoption of driverless trucks in Australia. However, as Exhibit 2 shows, the expected rate of adoption varies significantly by size of fleet. About one in five transport businesses operating 50 trucks or more expect to be early adopters of driverless trucks compared with one in 25 operators with only 1-2 trucks. 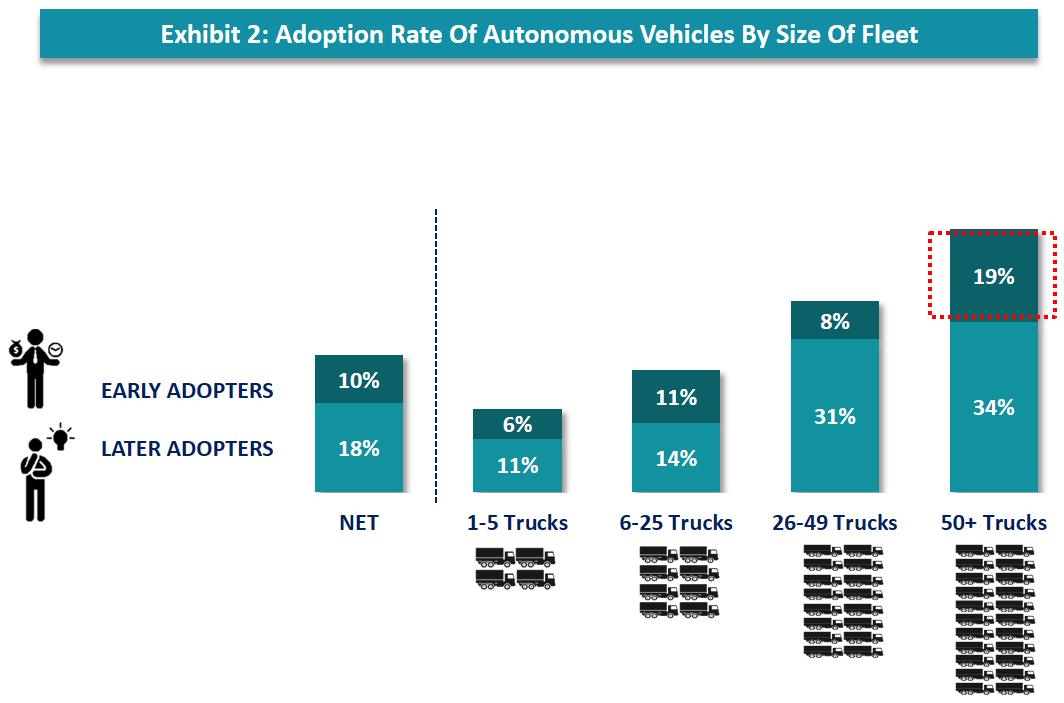 The larger transport operators, with fleets of 25 trucks or more, only account for about 2-3 per cent of road transport businesses. However, ACA Research estimates they account for about half of total trucks in the road freight transport industry. Accordingly, their intentions to use autonomous vehicles will have a significant impact on the market and on the tipping point for wider adoption of the technology.

Why Go Down This Road?

Rather than focusing on when a technology will be adopted, it’s more important to focus on why. So, what competitive advantages are offered by driverless vehicle technology? At an overall level, the perceived benefits of the technology fall into four main categories: reduced operational costs, increased productivity, safety improvements, and a better experience for the customer (see exhibit 3).

A more in-depth examination of these benefits shows that the smaller fleets are more likely to see no competitive advantage whereas the larger fleets expect to achieve significant gains around reduced operational costs, safety improvements and a greater level of productivity (see Exhibit 4). 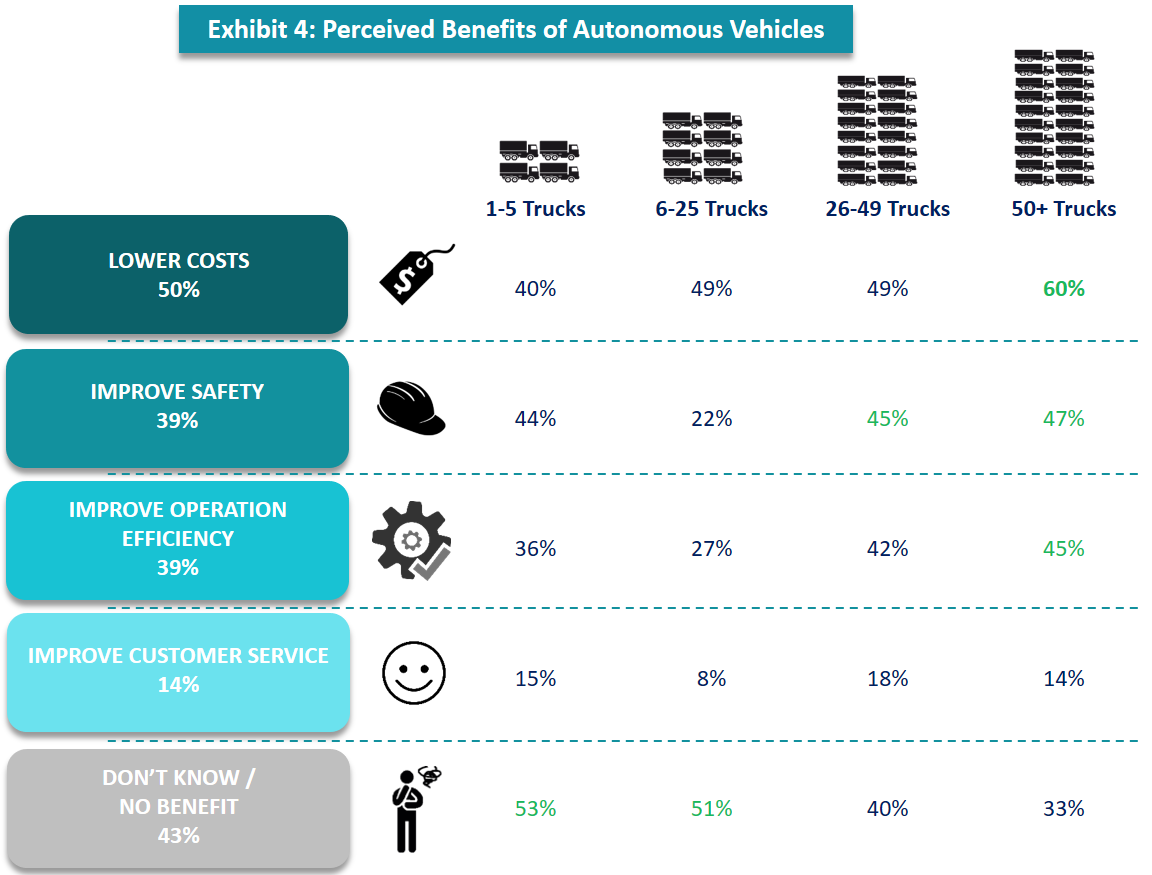 If these gains materialise, it’s reasonable to expect that technology laggards will soon be at a significant disadvantage. This will create pressure for them to use autonomous vehicle technology within their fleets.

How the future unfolds is always uncertain but, in seeking to understand how technology will shape the future of the trucking industry, it’s important to remember that the future remains in your hands.

In Charles Dickens’ A Christmas Carol – when the Ghost of Christmas Future points at Scrooge’s tombstone – Scrooge asks: “Is this what must be, or what might be?” More than 170 years later, this still offers a valuable lesson for the transport industry. Change is definitely coming but it’s the industry and not the technology that will determine how this plays out.

Learn more about the findings on autonomous trucks and its key role in the transport industry in our Industry Research Report. 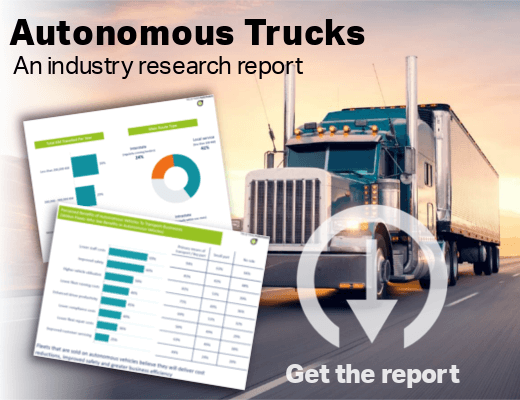 To learn about telematics and how it can help your business...

Get a Free Live Demo Now!